One Reason Why Your New Year's Fitness Resolution Isn't Working

Lots of people make the same New Year’s Resolution year, after year, after year.  They say that they’d like to “get in shape” or “lose some extra pounds” or “tone up a bit”.  Do any of those sound familiar to you?  Sadly the majority of resolution makers never achieve their goals.

I’m sure you recognize these people.  They’re the ones filling up cardio rooms in gyms all across America the first 2 to 3 weeks of January.  If you’re in a warmer climate, you’ll see tons of joggers appear during the same time frame.  These crowds of new gym members (or runners) usually disappear by Groundhog Day, though sometimes there’s a resurgence right before beach season too.

What’s wrong?  Why aren’t they transforming their bodies into stronger/leaner versions of what they had before?

Besides trying to go it alone, without qualified, professional supervision, these people make one other glaring error (not that there aren't other errors too!); they end up only addressing one piece of the fitness equation.  Just jogging, or doing cardio a few times a week isn’t enough to get the job done.  You may be asking why not?  If I exercise more I lose weight right?  That’s only a half-truth.

There are three pieces to the fitness equation:
-     Recovery
-     Appropriate Nutrition
-     Weight Training/Conditioning (at an adequate intensity)

I’m going to stick with the ‘cardio is enough, right? I really don’t have to lift weights do I?’ theme here, but please note that the other elements (recovery and nutrition) are just as important in the whole scheme of things.  The problem with just going out and jogging (or putting in some treadmill/elliptical time in the gym) is that it’s probably not intense enough work to burn a significant amount of calories.  If you factor in a poor diet (either low nutritional value and/or high calorie total) it’s pretty clear why just starting a cardio routine won’t get you too far.  I totally understand why most folks give up.  No one wants to put in gym or road-work and not see any results.  They just don’t know that their effort is insufficient to create a change in their body.

In addition, cardio (and I use that word loosely) on it’s own, or as most people do it, is not the best means to ‘toning up’ or ‘losing some extra pounds’.  You’re probably thinking, “Jb, competitive marathon runners don’t look like they have weight (fat) issues”.  And while that’s a fairly factual statement, I'd reply by asking if that really is the body-type you want to end up with?  Not that there’s anything wrong with running in a marathon or being a competitive endurance runner.  It’s just that they are really, really skinny.  Competitive endurance athletes also have a significantly greater volume of training going on than your average cardio resolution maker. 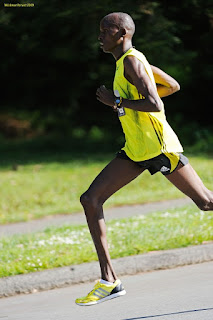 Notice that on the fitness equation list I put weight training along with conditioning.  When the words ‘weight training’ are mentioned some people get turned off, or fear that they’re going to ‘bulk up’ like a body builder.  That couldn’t be farther from the truth.  If it were true, everyone who’s picked up a barbell or a pair of dumbbells would look like Arnold Schwarzenegger and Ronnie Coleman.  And you don’t see to many specimens like that walking around the gym.

The truth is most of the people I’ve been talking about are some version of “skinny-fat”.  What that means is they have a higher % of body weight from fat and not a lot of muscle on their frame (think of a 140 lb. female at 5’5” with 35% body fat, that’s skinny-fat).  They are essentially super-skinny way down underneath the layer of fat on their body.  So if they actually succeeded in loosing some weight or ‘toning up’, there would be nothing more than skin and bone left (please don’t confuse this example with folks who are extremely skinny from an eating disorder).  You see this skinny-fat body type in both men and women.

Increasing your muscle mass (and I do not mean becoming a body builder!) has a positive effect aesthetically (after you’ve dropped the fat) and also increases your metabolism (maybe not as much as it’s generally promoted, but still enough to help the fat loss cause).  Whether you like the idea or not, the bottom line is you need to build up some level of muscle mass (along with your conditioning work) to achieve the desired goals. If you still need further proof that muscles are good, check out these Mountain Athlete examples:
So the message is “don’t be afraid, lifting weights is ok, muscles look good” and besides, if you’re going to put in all that effort to ‘get lean’ or ‘tone-up’ why not have something underneath worth showing off?
Posted by theMountainAthlete at 10:07 AM